Kristóf Milák was the most successful swimmer on the Hungarian team at the European Championships in Rome. He added three gold and two silver medals to his collection – not to mention winning the 200m butterfly with the seventh best time in the world's all-time rankings.

We are starting to take it for granted that when the 200m butterfly comes, the Hungarian gold medal comes with it – no matter if it's the Olympics, the World Championships, or the European Championships.

It is easy to get used to the good, of course, and we should thank God that Kristóf Milák was born Hungarian, that he found swimming as a child and that swimming found him.

„In a music talent show, even I can hear who has a beautiful voice, it's not that difficult. The buffet lady in the swimming pool would have spotted Kristóf's talent,” said head coach Csaba Sós, because it is clear that this boy was born to swim.

And slowly and slowly, we are getting to the point where we no longer need to narrow the circle down and say that Milák was born for the butterfly.

That we'll get there sooner or later was perfectly proven by the recent European Championships in Rome, where Kristóf Milák not only won the 200m butterfly but also the 100m butterfly. This all means that he doubled again after the European Championships in Budapest last year, he won the silver medal in the 100m freestyle, and he also made a great impression as the finishing man of the 4x200 and 4x100 freestyle relays – he led the former to a gold and the latter to a silver medal. And he really did.

Nándor Németh, Richárd Márton, and Balázs Holló also had a great time in the 4x200 freestyle relay final, but it’s still a fact that the French were one second and the Italians were one-tenth of a second ahead of us before the last 200 meters – but Kristóf Milák came at the end, and no team had such a man. That time of 1:44.42 was not really born at the Foro Italico but in another universe... It is the story of the 100th Hungarian swimming gold medal at the European Championships - and it is also the story of the last men in the Italian and French team whom Milák swam over by a second and two and a half seconds, respectively.

„What can I do, I can't swim slower" he commented on one of his swims to his coach Balázs Virth in Rome.

But if we think about it, this boy's name actually came into the spotlight five years ago, at the World Championships in Budapest, where he won a silver medal.

„My first memory of Kristóf is that his flip turns were incredibly bad," recalled Attila Selmeci, Milák's former coach. "Then he won the 100m butterfly at a junior national championship, and although he had previously competed more in backstroke and freestyle, I started to think that this kid could be really good in butterfly. And he got better and better in his age group, but not just at home. And then at the 2016 Youth European Championships in Hódmezővásárhely, he swam 1:56.77 in the 200m butterfly, and we were just standing there asking, „How did he do that?” Being a cautious person, I said: anything could happen. Shortly before the 2017 World Championships at home, he moved up to second place in the adult world rankings in the 200m butterfly at the Youth European Championships in Netanya. At that point, I didn't feel that anything could happen, but that he was a world-class athlete.”

At that time, the world-class swimmer was „only" born for the pool, Kristóf could hardly find himself at the poolside.

Meaning that Csaba Sós, the head coach, praised him in vain: „You know what I like most about you? That you've got balls, you are not afraid of anything!!" Milák was still quite "shy" on the poolside at that time. Although he tried to answer the journalists who questioned him with well-worded sentences, he was unsure: "What do I have to say now? Did I do a good job? Sometimes I look back at my interviews beside my swims. Sometimes my face burns because I could have said something else, in a different way. I'm practicing that, but I'm not doing that well yet.”

Milák has already made great improvements in this field, although he recently admitted self-critically, „I readily admit that I am not progressing at the same speed in giving interviews as in swimming.”

Because he is really coming on leaps and bounds in swimming - he burst into the senior scene in the summer of 2017 and in the last five years, he has grown to be one of the sport's biggest stars. That's why we take it for granted that when Milák takes to the starting block at an international event, he will definitely win a (gold) medal.

In the 200m buttery for sure, but this will change!

The world-class swimmer, who has been working with Balázs Virth since Tokyo, does not count the medals, saying, „That's the journalists’ and fans’ job, not mine. I'm not so interested in how many medals I've won in the past. I always think in the time results.”

The experience is already there among the seniors, but we could say that the years at the top have confirmed it in Kristóf – we didn't blink an eye when he described his 1:52.01 as a „modest time" after winning another gold in the 200m butterfly in Rome.

Just for the record, this is the seventh best time of all time...

That's not why Milák was smiling in Rome, but he was happier about the silver medal of his friend and teammate, Richárd Márton – and the fact that he invited his compatriot to join him on the top of the podium during the medal ceremony was, not to put it too literarily, but everything.

There he gave a little glimpse of the Kristóf Milák whom few people know because the champion only lets a few people get really close to him.

But that scene did show that he had a sensitive heart and was looking out for his friends.
As well. But mostly for himself.

And while this sometimes brings difficult moments and interesting situations accordingly (in the pool, in competition, in the mixed zone...), we are also learning that a world-class athlete often needs to be treated differently.

When Kristóf appeared in the crowd of journalists at the end of the European Championships in Rome, one of them remarked that it was very difficult to ask him anything new or different – and Milák's face brightened up:

„Well, finally something! You have to think about what you ask! Yes, I have achieved that too!”

True, the new question was followed by long silence, because Milák does not like to talk about himself. Therefore, he does not speak.

But he says he does the same ordinary things in everyday life as everyone else.

He saves the big bangs for the water.

So, in light of this, let's write down once again the sentence that Kristóf Milák said when it was suggested to him that they had not seen such a swimmer since Tamás Darnyi: „And you have not seen anything yet!" 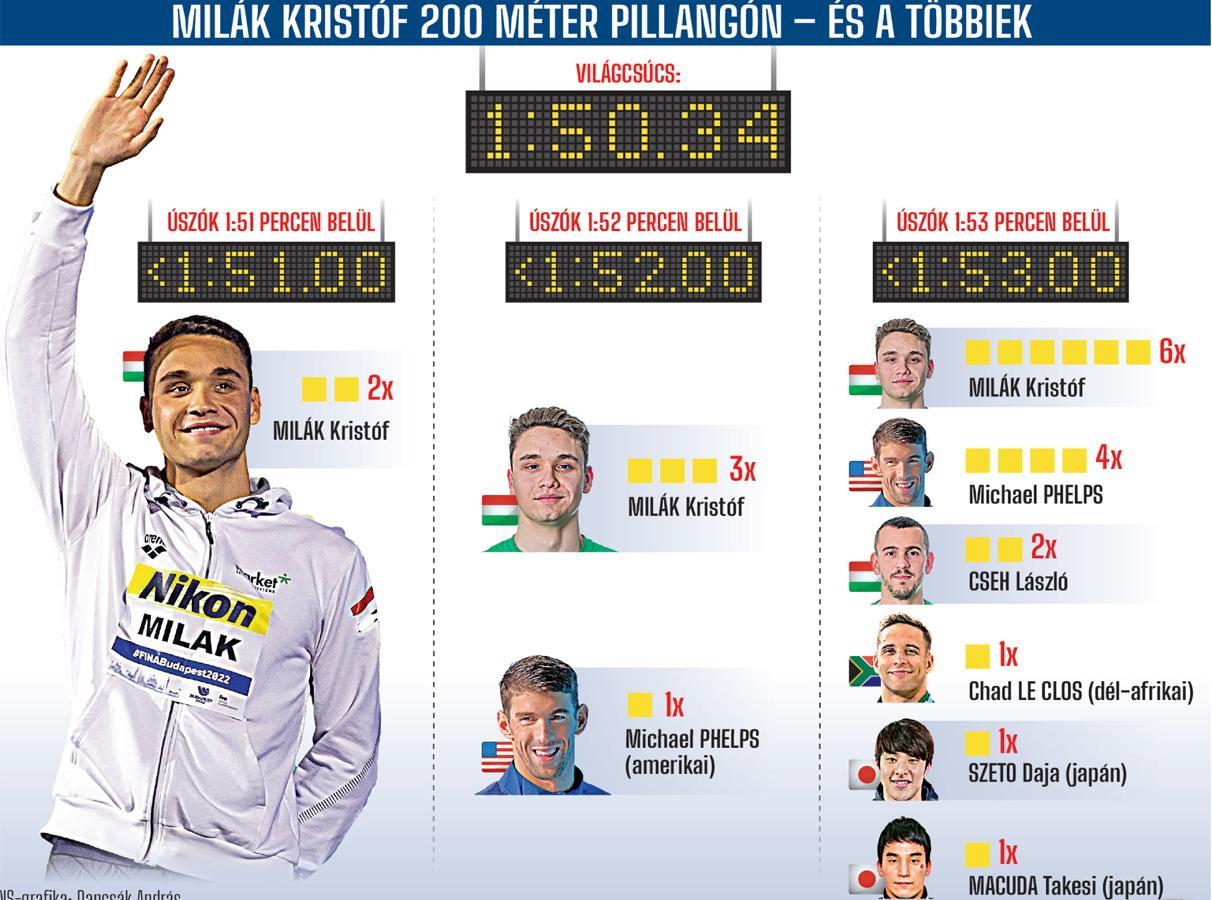