– Have you always been this calm?
– I don't like to stress over things – AZ Alkmaar defender Kerkez Milos, who made his debut in the 1-0 win over Germany and was also on the pitch for Hungary in the 2-0 defeat to Italy, told our newspaper. – I can't deny that I was nervous the day before the game in Leipzig, I played out in my head what to expect, but Marco Rossi and the others reassured me so much that by the time I ran out on the pitch, I didn't care about anything but to win.

– Didn't you care that Thomas Müller was running towards you?
– I never cared who the opponent was. It could have been Zlatan Ibrahimovic and I wouldn't have been scared. I always want to be the best in all circumstances, I want to become a top player one day, and that's the only way to achieve that. In Germany, I gave my all and played football with courage.

– Was your debut dreamlike?
– It's hard to imagine a better one! I will remember that day for the rest of my life. Making a debut against Germany, away from home, as a starter, in an international match, and in such an important ninety minutes, is something that not everyone gets to do. It was an unforgettable moment for my whole family.

– Did you host your teammates in honor of your first national team match, or is that still to come?
– There was a small celebration in the dressing room, the others congratulated me one by one, but there was no time to go to a restaurant because of the busy schedule, and I couldn't even buy them a cake. But I let them know from here: don't worry, next time we get together, I'll make up for what I missed!

– What was it like to return to the Netherlands as a Hungarian national team footballer?

– Everyone at the club congratulated me. Not only the professional staff and my teammates but every employee of the club. Even the doorman and the groundsman said hello, no joke. That's the way it is around here.

– It was also a topic of discussion in Serbia that you ended up choosing the Hungarian national team. Has it never been a question for you which team you would like to play football for?
– Hungary always came first! My father and my Hungarian grandmother would have wanted it, and so did I, there was no question about it. I decided at a very young age, at fourteen, that if I ever got that far in my career, I would like to play for the Hungarian national team. Not to mention the fact that Serbia has never asked me to join while Hungary did when I was fifteen. I am respected here, as is my family, and I will never forget that.

– Is it true that you started playing football in midfield?
– Yes. At first, I was a bit angry that I was put in the back as a defender because I really liked playing in midfield. When I started playing in Győr's senior team, I was tried out as a wingback, and I played well. A lot of people said that I had everything for the position, and I got to like it after a while. I realized that left-back was the best position for me. When I was a kid, I lived for scoring goals, but now I'm focused on defending. 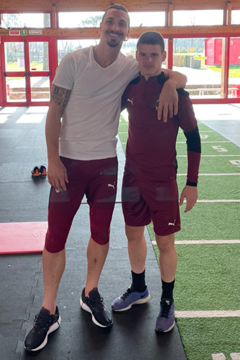 – As a child, did you play football on the streets all day?
– My father didn't play football professionally, but my brothers and I used to play for hours in the backyard. We could hardly be persuaded to have dinner.

– You're just over eighteen years old, but you've already experienced five different football cultures in five countries. In addition to Serbia, you've played in Austria, Hungary, Italy and now, in the Netherlands. Where did you develop the most?
– Each of these places has given me a lot. I have learned a lot from each adventure, and I have become more. From each culture, I took something that I can use most in the future.

– Is it true that, in Milan, you learned most from French national team player Theo Hernández?
– I watched him play a lot, he taught me a lot about attacking play and how to make the best use of my speed. I really like his game, he's a real star player.

– Why did you leave Milan?
– Because I wanted to play. AZ Alkmaar is the perfect choice, this club is ideal for the development of young players. I found myself in an incredible environment. When I first walked into the stadium, I saw my photo on the projector, it was a special moment. It is an honor to be a member of AZ.

– Have you fallen in love with Dutch small-town life?
– I don't live in Alkmaar, I live in Amsterdam. My mother and father moved with me, and we just love living here. I'll be honest, I still need my parents a lot, and it's nothing to be ashamed of. It's natural at this age. My father and I can talk about football for hours, he's my best advisor. I'm glad my parents are here with me in the Netherlands.

– Do you really like being the center of the dressing room, joking around?
– That's how I am. For me, it's not an act, I'm not putting on a show. I just can't sit still, I'm full of energy.

– And which league do you dream of as your final destination?
– The Spanish. And one of the top teams there.